The city of Columbus was founded on May 29, 1856 when a tired, weary caravan of thirteen men with their ox teams halted at the site of what is now Columbus.  These men were : Jacob Louis, Frederick Gottschalk, Carl Reinke, Michael Smith, Jacob Guter, John Wofel, Vincent Krummer, Henry Lusche, Charles Bremer, John Browner, J.P. Becker, Anthony Voll and John Held. For the most part, the founders were natives of Germany and Switzerland, and one, John Browner, was born in Wexford, Ireland.

Among the first Catholic settlers were John Haney, James Haney, Adam Smith, George Berney, Pat Murray and Hugh McDonough.  Soon after, many other Irish Catholics settled along Shell Creek.  At first a traveling clergyman had to satisfy the religious needs of these pioneers or they had to journey to Omaha for Church services.

Already in 1860 the Catholics of Columbus and vicinity, under the leadership of John Browner and others, had organized a small parish and welcomed the Reverend Almire Fourmont as parish pastor.  The church was named St. John’s after the patron saint of John Browner. The first facility was a small log cabin thatched with slouth grass or straw and later covered with boards; it had a door and three windows on the east side. This building was the first church erected by any denomination in Platte county. It stood on the northeast corner of what was later Eighth Street and Nineteenth Avenue.  The first parishioners were John Browner, John Haney, James Haney, Pat Murray, Henry Carrig, David Carrig, James Carrig, John Dineen, Michael Dineen, Edward hayes, Thomas Lynch, Mrs. Dunlap, James Conway, and Mrs. Brady. In 1862, the second St. John’s church, a framed structure, was built by who was generally thought to be Father William Kelly. The church had only two windows on each side and was located on Ninth Street and Nineteenth Avenue, called Grover Street then.

As the Catholic population grew, a delegation went to Omaha in 1873 to ask the Vicar Apostolic, James O’Connor to organize a parish. With permission from the Vicar, the German and Polish Catholics started their own little congregation. As a temporary church they acquired two lots with a frame building for $1,000, formerly the First Ward school. This building stood at 1802-1812 Eighth Street, west of Eighteenth Avenue.

As the Nebraska population grew, so too did the need for priests and facilities to handle the growing Catholic community.  In February, 1877 Father Ambrose Janssen, O.F.M (Order of Franciscan Friars), arrived in Columbus to select a site for a new Church.  As money was scarce, Father Ambrose gladly accepted the donation of two blocks and the offer of two more by Mr. and Mrs. F. Gottschalk. There was a condition attached to the gift, however; unless buildings valued at a certain sum be erected by a certain date, the site including buildings reverted to the donor. The Franciscans prevailed however, and a church and monastery were built on time and with an even greater value than stipulated.

Later the monastery was built on Eighteenth Avenue between Fifteenth and Sixteenth streets.  It was a brick structure, two stores high with a basement, eleven sleeping rooms, a library, kitchen and dining room.  The bricks for the monastery were burned on the Franciscan grounds west of the monastery and the lime was slacked in the enclosed eastern garden.  Clay was hauled by farmers from the bluffs near Shell Creek.

Entrance to the temporary St. Bonaventure’s Church seems to have been from the north side; the steeple was on the south side. When the brick monastery was ready to receive the Friars the winter of 1877-1878, the church was remodeled. On November 17, 1878 the Bishop dedicated the friary, school and church.  At that same time, the Angelus Bells started ringing at St. Bonaventure’s Church regularly at 6 AM, 12 noon and 6 PM.

The cornerstone for the new brick St. Bonaventure’s Church was laid by the Right Reverend J. O’Connor on July 8, 1883. The church, forty-two feet by fifty feet, was built north of the monastery. The old frame church was sold to Mr. Edward Schober who moved it to the lot south of the corner of Fifteenth Street and Nineteenth Avenue and remodeled it into a two-story residence.

Forty-two feet were added to the church in April, 1891. As planned, the winter chapel was added was erected in 1894. Reverend Cyril Mitera, O.F.M, the first priest from Platte County and St. Bonaventure’s Parish was ordained July 1, 1899 and celebrated his First Solemn High Mass on July 4, 1899 in the new winter chapel.

In 1907 more improvements were made in the facilities.  A new boiler for steam heating, a vapor system was installed, and new sidewalks were laid. As the seating capacity of the church was only 394 and the parish was growing, the time was considered ripe for the completion of the church in accordance with the original plans. Another twenty-eight feet and a tower were added, which made the whole brick structure measure fifty by one hundred and fifty feet. The addition, finished in 1909, had a total seating capacity of four hundred and ninety.

Three new bells were installed in the church tower, one weighing 3,000 pounds, a second 1,700 pounds and the smallest 1,000 pounds.

On October 4, 1913, the Polish Catholics who wanted to preserve their ethnic identity were permitted to withdraw and form a parish of their own. Father Protase Kuberek, O.F.M. organized the parish of St. Anthony.

The first church organ was purchased from the Wick Organ Company in Highland, Illinois in 1915. In October, 1920 about 200 loads of dirt were hauled to the front premises of the monastery and church and covered with five carloads of gravel, to make a parking place for the automobiles of the parishioners.

The parish also bought the Presbyterian Church on 14th Street and 28th Avenue for the convenience of the parishioners living in the north and west outlying districts.  The building was remodeled and November 27, 1920 dedicated to St. Joseph.

Soon after, the old winter chapel adjoining St. Bonaventure on the north, was converted into a parish hall for society meetings.

The first crib for Christmas liturgy was purchased in 1921. In September, 1926, the pastor signed a contract for 18 new stained glass windows to be imported from Munich and installed in the church. On November 27, 1949, the first issue of the parish bulletin was printed (1,100 copies).

On May 7, 1950, a grand opening was held for the newly remodeled parish hall and youth center. On Monday, June 26, 1950 at 7:30 PM, the first spade of dirt was turned for the elementary school, social hall and convent. Construction of the new buildings was completed in 1952. On April 18, 1952 the Sisters moved into their new Convent and Holy Mass was offered for the first time in the Convent Chapel on April 21, 1952.

The fourteen original Franciscan Stations of the Cross were substituted for the seven Stations of our Sorrowful Mother on May 17, 1963.

Because of the continued growth of Columbus to the west and north, St. Isidore Parish was established to serve the Catholics to the west of Thirty-third Avenue and from Ninth Street to the north. The new church began services on June 13, 1963 with Father Francis Price as pastor.

Extensive changes in the liturgy were initiated in 1964. On November 8, the first laymen read the Epistle scripture. English language masses for Sundays, and Holy Days began on the first Sunday of Advent, November 29, 1964. On Monday, March 22, 1965, weekday Masses were changed to English.

In June, 1968 a Parish Finance Committee was created to study immediate needs, to propose and prepare for the future, especially long-range projects, to advise on ways and means of meeting commitment and to make recommendations for all parish financing. The following parishioners were appointed to the newly created Finance Board: Mr. W.L. Boettcher, Mr. S.E. Brenner, Mr. Leo Dowd, Mr. V.W. Hughes and Dr. Louis Sojka.

During the summer months of 1970 the parish priests offered Holy Mass in the homes of parishioners who requested it, on days other than Saturdays or Sundays.

In June, 1973, air conditioning was installed in the church.

Since Valentine’s Day, 1961 the St. Bonaventure Church doors remained unlocked, but in 1973 the parish council found it necessary to recommend locking the front doors at 6:00 PM each evening, except Saturdays, Thursdays before First Fridays and other special evenings, when the doors will be secured at 9:00 PM. One side door is to remain unlocked for Perpetual Adoration.

The coat-of-arms of the parish patron, Saint Bonaventure, Franciscan cardinal-bishop, was added to the sanctuary above the presidential chair in February, 1974. The tones are somber and represent the complete simplicity of the shield which was typical of St. Bonaventure. The gray represents the color of Franciscan bishops; the HIS emblazoned in golden rays represents the Holy Name of Jesus; the motto “To God Alone – Honor and Glory” is the dominating motive of all St. Bonaventure’s endeavors.

In February 1974 Mr. and Mrs. Paul Dohmen provided St. Bonaventure Parish a generous gift of a new Rodgers electronic organ and replaced the previous organ which had served the church for over thirty years.

On Sunday, February 6, 1977, parishioners and friends of St. Bonaventure gathered to observe the centenary of the parish and the coming of the Franciscans. Five hundred people attended the dinner-dance in the Scotus cafeteria which followed the 4 PM Liturgy of the Eucharist.

St. Bonaventure Catholic Church has been through a number of renovations in its long history.  The most recent major renovation was started in 2011 and almost a year later was completed in 2012.  A special Mass to re-bless the church was celebrated by Archbishop George Lucas on October 28, 2012. To see the amazing transformation graphically shown in before and after photos, visit our St. Bonaventure Church Remodel Before and After 2011 – 2012 Photo Gallery. Archbishop George Lucas, along with Deacon Larry Mielak, Fr. Tom Weisbecker and Deacon Art Spenner, participate in a special Re-Blessing Mass for the Church on October 28, 2012.

Parishioner Mark Leif provided us a copy of this rare pre-1917 postcard of St. Bonaventure Church and Monastery.  Note the postage was one cent.

This picture was taken before the Bell Tower was added to the Church. 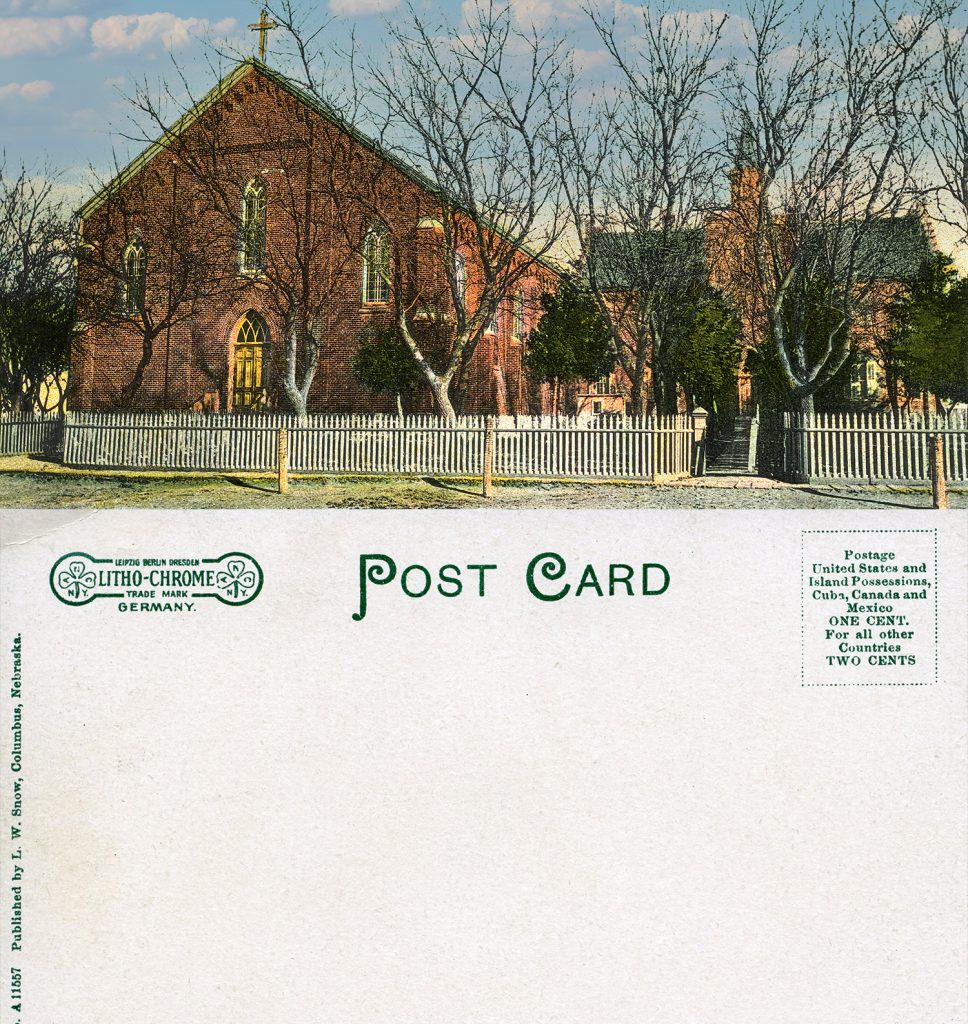